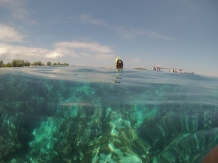 The second day in Gili Trawangan was about snorkeling, and exploring the other side of the magical island.

Early in the morning, after having breakfast (Indonesian banana pancakes of course!) we went to a tourist shop to book tickets to do snorkeling with Glass Bottom Boat which does daily group departures at 10.30 am from Gili T with return around 3.30 pm. We already did snorkeling in Bali, but to do it with turtles made Gili a special spot for doing this activity.

First we met the group in front of the Night Market at 10 am then we had to choose the fins and masks. Afterwards we went to the boat to start the adventure.We were not alone, there were more tourists with us. The plan was to stop in four places. We arrived to the first one but it wasn’t possible to snorkel because of the strong current, so we had to move to the next one.

The second point was quite and clear. When we arrived we put on our fins and masks, and jumped into the crystal water to see the fishes.

Unfortunately there were no turtles nor sharks, but I wouldn’t say that it was boring because we saw so many sea life & some very strange brightly-colored creatures, including something that looked like a centipede scurrying along the rocks.I was completely lost, or in other words, in a dream. 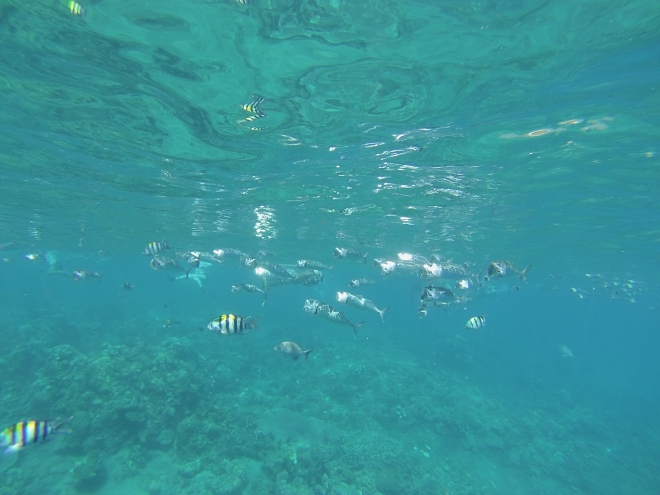 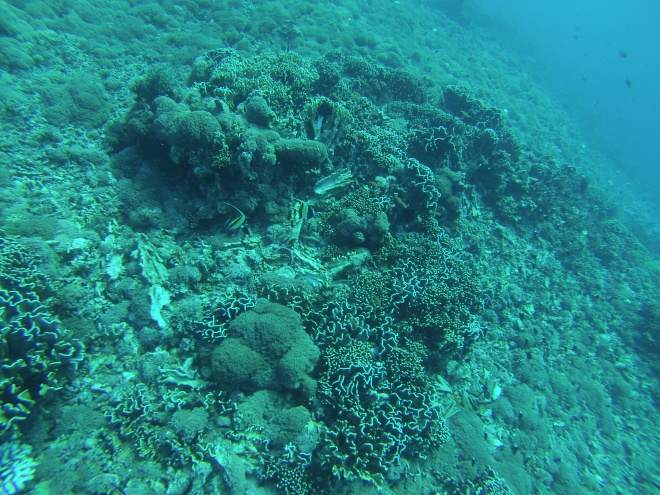 After admiring during 30 min the beauty of the second snorkeling spot, it was time to go to the next one. I was already wet and accustomed to the cold water so it wasn’t that difficult for me to jump again. With the sun, the water was warmer than before.

I had a problem with the mask. It didn’t fit me well and I had always water inside. So I had to ask one of the guys who was working there to change it. I thought that I was pissing him off but in fact he was very nice to me. I heard him talking to his friend and I understood him because I speak Arabic. I finished his sentence and he was like whoah!! Then we started to make jokes haha! He didn’t expected it but we had a funny conversation.

Anyway I came back to swimming. We had a man that guided us. When he spotted a large sea turtle gliding effortlessly against the current, he called us to follow him and to watch it. 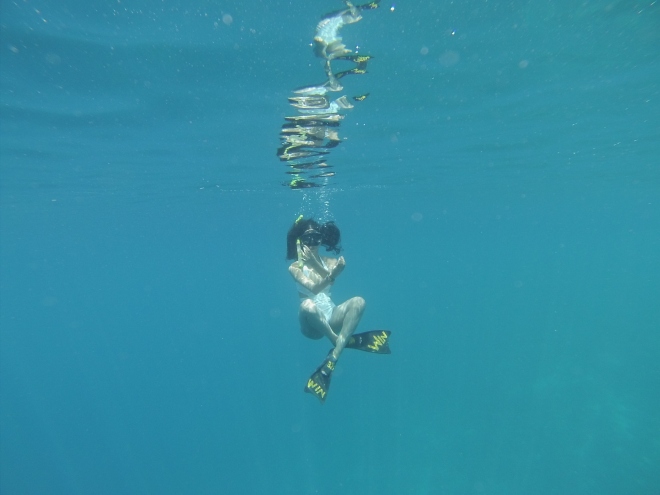 What a beautiful moment as we swam next to her under the water. This is what we had come for! Our best run was when we spotted 3 sea turtles!

Although I was very tired I tried with all my strength to swim upstream to spend more time watching a turtle which was coming up to the surface for a breath of fresh air.

I followed the turtle and poked my head out of the water in sync with her. It was an incredibly magical moment to be there while the turtle lingered observing the surface.

We spent the rest of the morning enjoying the great snorkeling and the fantastic underwater paradise around all the 3 islands: Gili Trawangan, Gili Air and Gili Meno.

Once we finished it was time to move to the following spot which was the last Gili Air. I was very tired and hungry so I decided to stay in the boat with Raquel.Hector and Roger went to snorkel, so we just sat in the boat touching the water with our feet and talking. 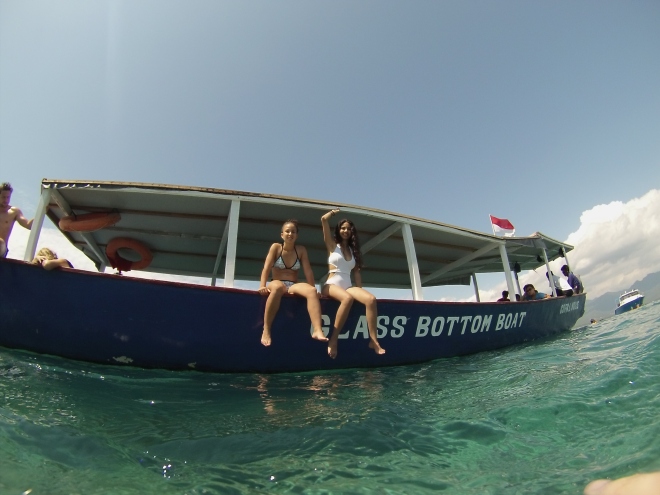 It was very sunny and I didn’t feel good. Being in the water all morning under the sun is not that easy.

When they finished we went to have lunch to Gili Air at a restaurant called “Shark Bites” overlooking the turquoise water, we enjoyed eating and watching the beautiful views around. I could have stayed there all day!! After that we had to get into the boat and go back to Gili T.

Trip tip: lunch is not included in the tour so I suggest you to bring money with you, it doesn’t cost that much it’s around 15 to 25 K IND rupee (5 to 6 dollars).

We had a little bit of drama in the boat because of the strong current. The boat started to jump and do weird movement and water entered in the boat. Honestly I was very scared, first thing that came up to my mind were sharks!!!! I didn’t want us to be lost in the middle of nowhere. But luckily nothing happened and we arrived safe.

Swimming in crystal water with sea turtles was a dream for me, it was my first time and also a perfect way to spend a morning. When we reached Gili-T we went straight to the cottage to have a shower and relax. Then around 5 pm we were already ready to discover the other side of the island, we went walking instead of renting a bike or a horse ride.

It was a way to enjoy the little details of the island: the local lifestyle, the houses, the restaurants, the mountain,… We were excited but tired, we walked all the coast which was full of bars and restaurants with a marvelous sunset view. 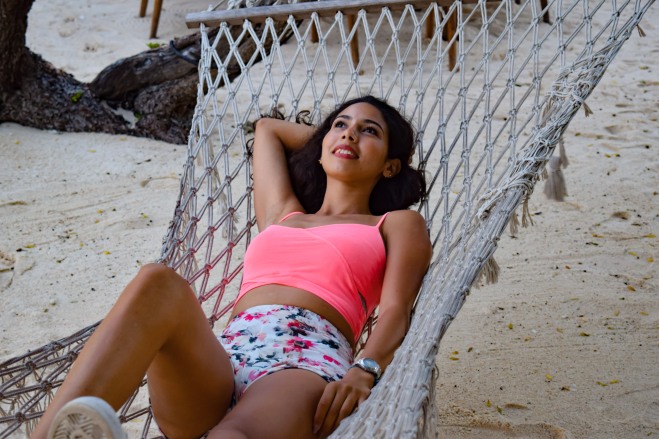 While walking we found the best bar on the beach. We had a drink chilling watching the sunset, In that moment I was thinking about how lucky and grateful I was for having such a moment with such a beautiful people. 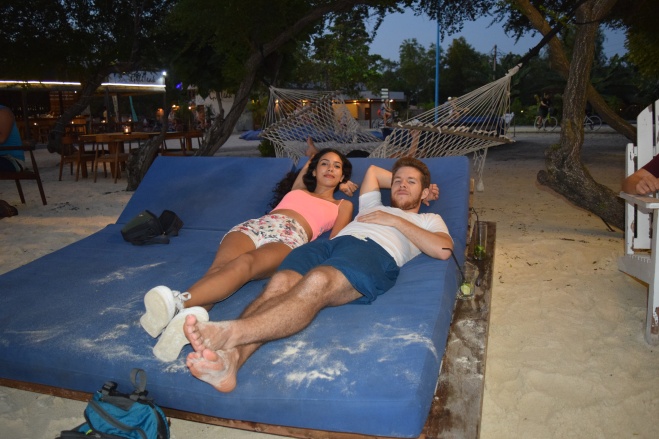 At the end of the day we came back walking again. We stopped at a restaurant called ”Little Italy” to have dinner. I really enjoyed the pizza, it was yummy! And then straight to the bungalow to sleep.

Stay tuned to see my next adventure in Gili T. I hope you enjoyed reading about my second day in Gili T.

African ,Berber woman, out to explore the big wide world. View all posts by AfricanBerberWoman