TUMULTUOUS PAST BUT BRIGHT FUTURE

” What to visit in Medellin in one day and where to eat! ”

Today, I hope my blog post will to change your perception about Colombia in general and the city of Medellin in particular, because this travel completely changed mine. Before traveling to Colombia I had many misconceptions. I’m glad I had a chance to travel to Colombia, see it with my own eyes and experience life in this great country. Before, all I knew and heard about Colombia in Social Media and News was about drugs and war… But Colombia is much more than that.

The third day of my trip, we had an interesting conference about The Urban Transformation of Medellin that lasted 4 hours. Then we did a city tour. We started by Botero Plaza, which is located in an area known as the “Old Quarter of Medellin”. The Plaza is a park in front of Museo de Antioquia, displaying 23 abstract bronze sculptures created by World-renowned Colombian artist Fernando Botero. In the area there is a lot of informal commerce, you can buy souvenirs, and you can also take nice photos. 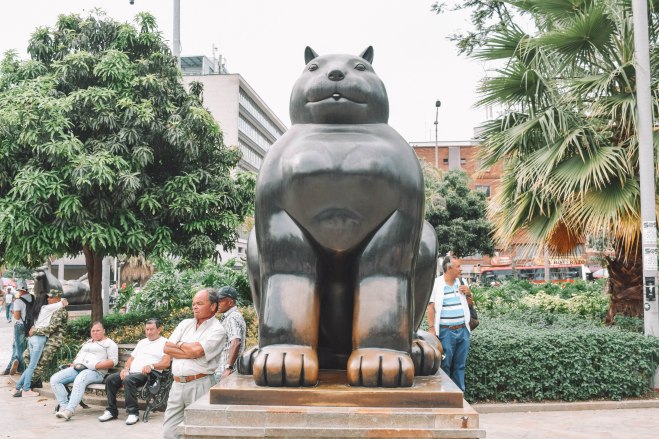 Afterwards we had the Metrocable tour. Of course, it wouldn’t be the Medellin Metrocable Tour if we didn’t jump on the Metrocable, would it? In 2013 Medellin was named the most innovative city in the world, largely because of the leaps it made to mobilise people from poorer areas of the city in order for them to have access to work, education and cultural activities.

One of the main reasons the city won the title was because of the metrocable systems, along with other means of transport available in the city – including a 28-story escalator and the aforementioned metro train system. We floated above the comunas of Medellin, once considered the most dangerous parts of the city, and shared the carriages with locals making their trips back home. 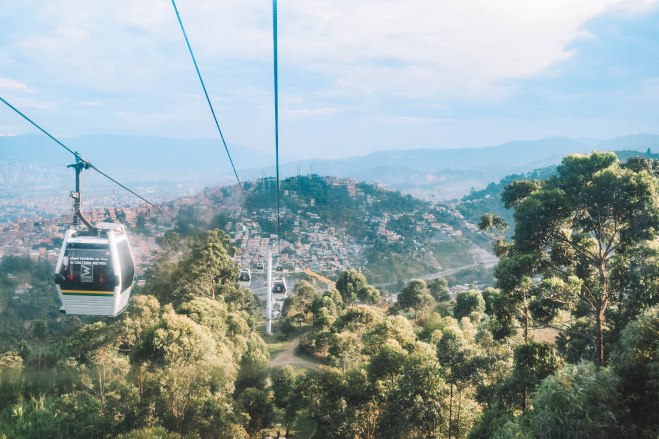 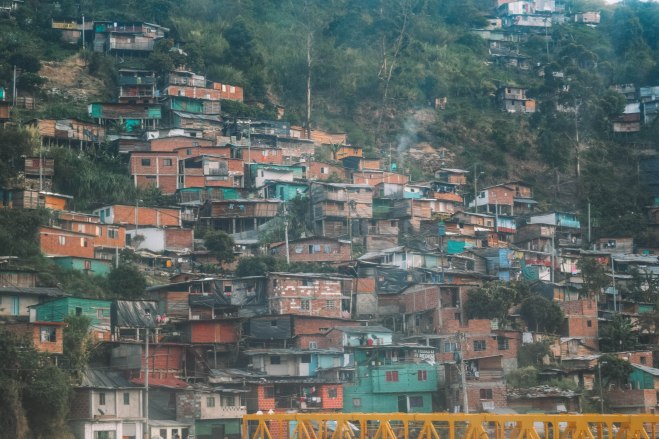 We did a round trip of the area before returning back to the cable station, swinging above the houses below with their brightly-coloured doors and corrugated iron roofs, some held down with bricks and pieces of concrete.

Comuna 13 of Medellin was once known as the most dangerous place in the entire world. Plagued by paramilitary, gang and guerrilla violence through the 80’s, 90’s and early 2000’s, the people of Comuna 13 were afraid to leave their homes. After the death of Pablo Escobar, the community only became more dangerous and violent as different factions fought for control. 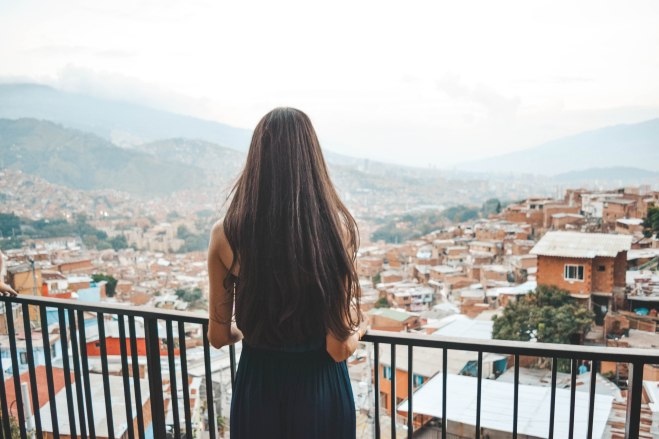 Today the community has pulled away from its painful past and is in a state of transformation. The streets are alive with vendors, dancing and beautiful artwork. Kids are playing in the streets at local parks. The people of Comuna 13 now feel safe, proud and are looking forward to a prosperous future. 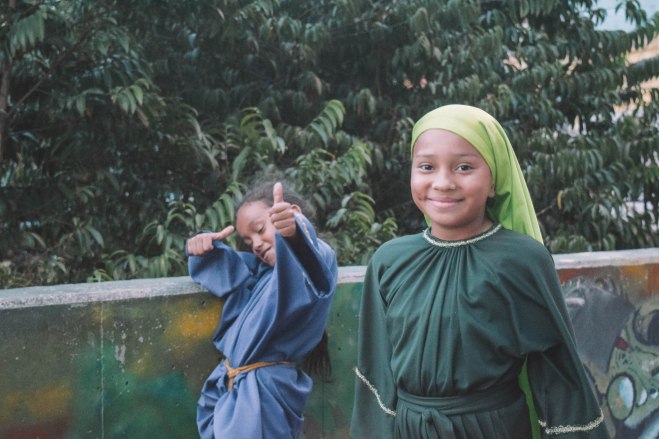 After the metrocable tour, it was time for the Graffiti tour. We walked around the streets of Comuna 13 and watched all the outstanding street art made by the locals. The neighborhood was packed with street art, definitely a must see if you go to Medellin. 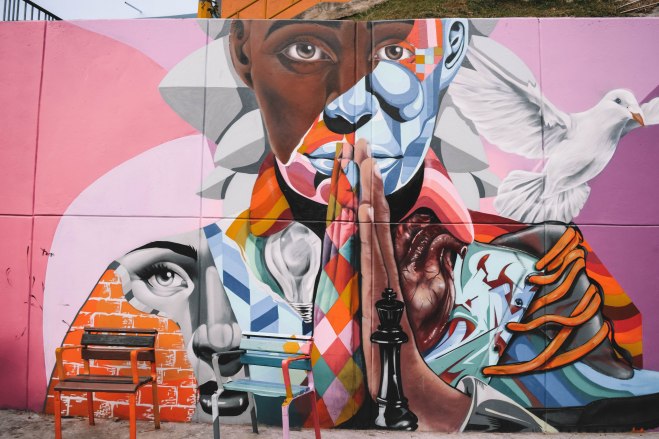 Once one of the most dangerous neighbourhoods in the world, now became a must visit place in the Latin America, not only because it is colorful, but also because it’s an inspiration to those who get a chance to meet locals that share with you their history, their early pain but also their perseverance that changed the whole spirit of the neighbourhood! Through Art, colors, projects and hopes they are fighting to develop a great future for all generations and be an example to many other countries. 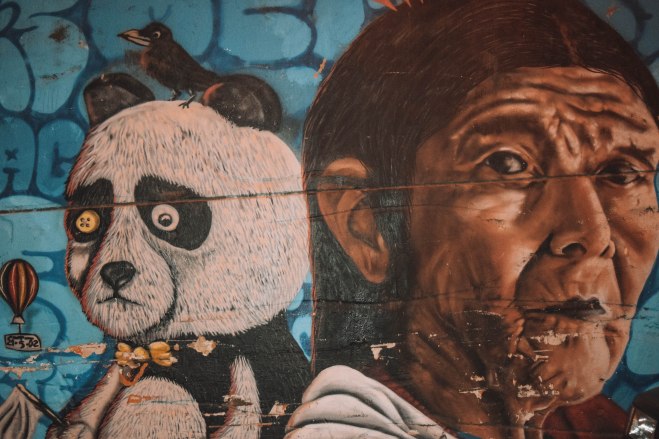 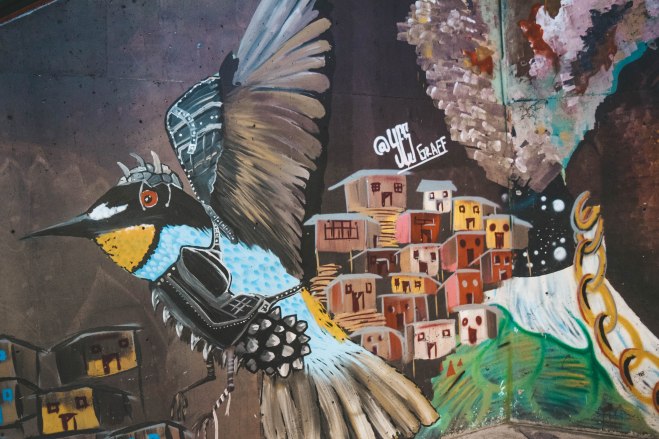 The people of Medellin have lived through difficult times that most of us couldn’t even imagine. Their kindness, positivity and optimism in the wake of such a troubled history has left us humbled and inspired.❤️

Also here are some restaurants that you must try when you visit Medellin:

– El Mercado Del Río : if you are looking for a food sensation in Medellin, look no further. This place has everything: Traditional Colombian, Mexican, Peruvian, any kind you want. There are also some small bars if you want to go for a drink. I really liked the ambiance.

I hope you enjoy Medellin as I did. The next post will be in the magical Cartagena, stay tuned ❤

African ,Berber woman, out to explore the big wide world. View all posts by AfricanBerberWoman

52 thoughts on “Tumultuous past but bright future”